Team Tempest were more generous than the ghosts!

Don't wait to get fit to have fun!

Team Tempest were more generous than the ghosts! 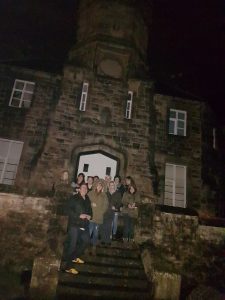 Our first Charity Ghost Hunt took place last night, in aid of Durham homelessness charities and we were left high in spirits despite Vane Tempest Hall lacking in spirits!

Armed with torches and a good sense of humour, twelve intrepid amateur ghost hunters gathered at 9pm in the sports hall to do a group call out. The spirits at first seemed to be very responsive to our questions, until we realised the taps we were hearing were actually drips of rain into a bucket!! A few of us witnessed a figure in white on the door to the kitchen area which we couldn’t explain, and it seemed to go in and out of focus.  We also had the distinct feeling of being watched; CCTV has been recently installed. 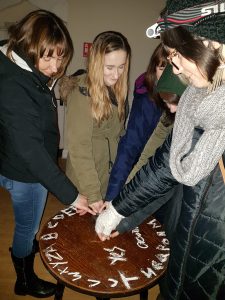 In unit 6 we attempted to contact the spirits via a Ouija board and we appeared to contact someone called Ed. Could it have been someone called Edward?  The glass only seemed to move to one side of the table, so maybe it couldn’t reach the ‘w’. Sceptics may say it was being pushed….or was it? Kes was keen to do a lone vigil in unit 6 in the pitch black, so we left her with a walkie talkie while we investigated unit 4 which has witnessed a lot of orb activity on camera. Twenty minutes later we remembered Kes and when we contacted her on the walkie talkie she said she was just ‘lonely’. Obviously no ghosts had come along to keep her company! 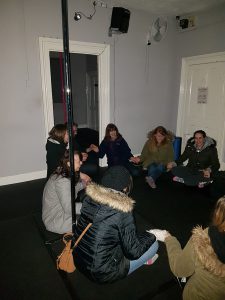 Our vigil at the top of the stairs in the hall was a little more exciting. During a call out the door to the left rattled on its own and we all scrambled towards the stairs screaming. After the miracle of avoiding going head first over the bannister we took a quick, well needed toilet break.

Finally, as we were leaving at 1pm, the fire bell at the top of the stairs made a quiet clanging noise….as we fled out of the doors we saw Kerry coming down the stairs with a big grin on her face. The whole night was such good fun, despite desperately wanting some evidence of spirits we witnessed very little and remain unconvinced. However, we did raise over £200 for charity proving that Team Tempest are much more generous than the Vane Tempest Hall ghosts!

(Thank you to the GCWA for allowing us to use the Hall for this event. All funds raised will go to CEO Sleepout please donate here https://www.justgiving.com/fundraising/mandy-tempest)