Don't wait to get fit to have fun! 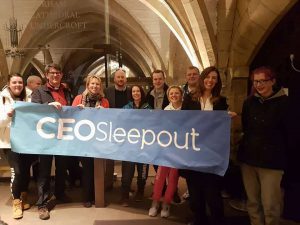 I was scrolling through Facebook one night in January when I came across CEO Sleepout UK. My team of amazing Tempest students and instructors had previously raised money for DASH who support those at risk of homelessness in Durham, so without thinking too much about what I had to do I signed up.

Then came the fun part; I realised that I had two challenges ahead. To raise a whopping £1000 in donations and to actually sleep outside (I detest camping). However, as I contacted Bianca to confirm my place and to ask if some funds I raise may go to DASH alongside the other great charities in Durham, I realised there was no turning back.

At Tempest we had raffles, secret auctions, a ghost hunt, a play day and other fund raising events. Team Tempest, along with family and friends, were so generous in their giving and as far as I can tell, with offline donations and gift aid included, we raised a huge £1458. We just about #beatthedean but despite not making it to the top spot for the biggest fundraiser, we had fun trying and raised a lot of awareness around the issues of homelessness. 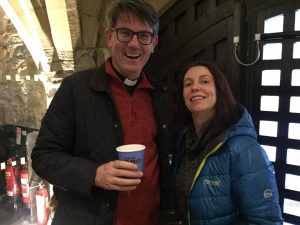 I really enjoyed taking part in the sleepout in the cloisters at Durham Cathedral, although I’m disappointed that I didn’t get to meet Badger the Cathedral cat. I met some great people including Matt who introduced himself by offering me £20 to #beatthedean!! We had to team up after that.

Quite a few of us chose to sleep on the grass, which had a beautiful view of the stars. However, when the temperature dropped significantly at 2.30am things didn’t feel quite so beautiful. I didn’t sleep. Did you know that the cathedral bells chime every 15 minutes? I do.

I sat up (not woke up) at about 5am wondering how people that are forced to sleep rough have the strength and capacity to start their day knowing that they have to do it all again, and again, and again. I was aching from head to foot and freezing cold despite wearing hat, gloves, 3 layers of clothing and 2 sleeping bags on 2 camping mats. This should have been relative comfort compared to the horrors of actually living on the streets. Also, I felt slightly vulnerable. I was in a secure area with likeminded people but people sleeping rough don’t have that security. I can’t begin to imagine how they may feel.

Still, when it was all over I felt a tremendous sense of achievement and I was very proud of Team Tempest and how their support and positivity raised so much awareness of homelessness and a huge amount of cash, which will make a difference to those that need support in Durham and the North East!! https://www.justgiving.com/fundraising/mandy-tempest